50/50 Blame for Pilot and Skydiver in Mid-Air Collision

The final report ERA14LA146 was released last month for the incredible collision between an aircraft and a parachutist with only minor injuries (and a totalled Cessna) as a result.

The pilot was an 87-year-old WWII veteran who has been flying all his life. He was flying in the circuit and had done three touch-and-go landings on runway 32: touching down on the runway to immediately take off and go again. He was aware that skydiving operations were in progress.

While he was flying, another aircraft with a group of parachutists had departed South Lakeland Airport and climbed to jump altitude. The skydiver in question was the 4th skydiver to jump. He deployed his parachute and manoeuvred to be parallel to the runway. He was watching another skydiver at about the same altitude and then initiated a left-turn so that he would land into the wind. His approach path crossed the approach end of runway 32.

Meanwhile, the pilot called out that his next approach would be for a full-stop landing; he was finished practising for the day.

Robert Goyer of FLYING knows the airfield and wrote about it a few days after the accident.

The airport is pretty small, and there’s a two-lane highway immediately to the east lined by power lines, which you can see in the photographs. There are tall trees at the departure end of the runway, but with more than 3,000 feet of available runway, the power lines are the greater hazard until after you’ve climbed out initially. On approach to Runway 32, there are high tension lines. It feels as though you’re descending into a funnel with only one place to go. On approach to Runway 32, where the Cessna was doing touch and goes, you can go missed in a emergency by executing a right turn over the airport grounds. Otherwise, once you’re as low as the Cessna was and already rotating for a touch and go, the options are even more limited.

What’s clear is that neither of them had seen the other and both were on their final approaches without any awareness of a conflict. 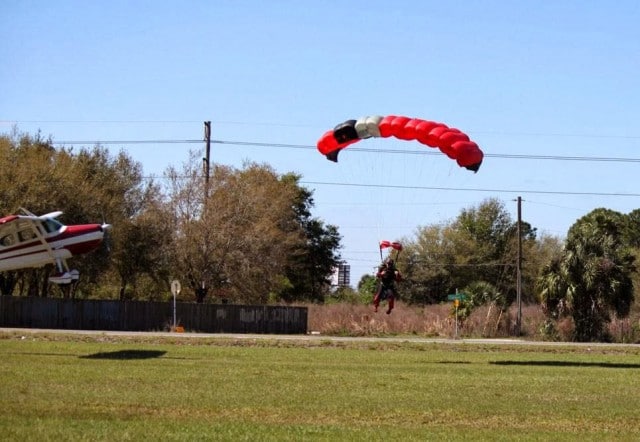 The Cessna 170 was on short final coming in to land as the skydiver glided across the runway. They were 75 feet above the ground when the pilot saw the skydiver.

“A parachutist dropped down in front of me and was going to land in the center of the approach end of the runway.” 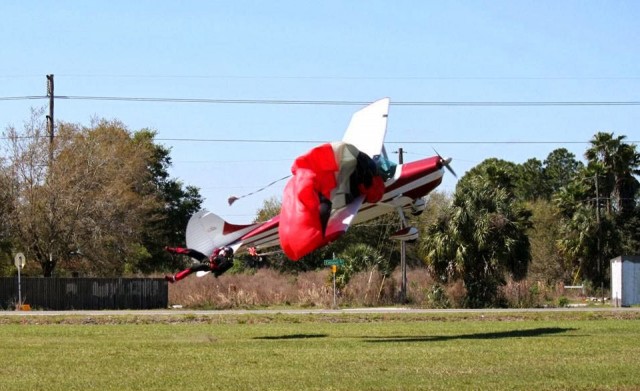 Tim Telford was taking photographs of the skydiver as he was about to touch down and he couldn’t believe what he saw. 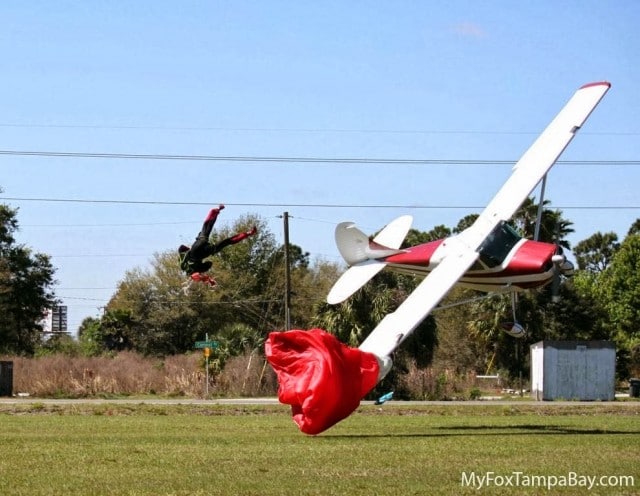 The pilot immediately climbed in a desperate attempt to avoid the man who had effectively dropped into his view. However, he wasn’t able to climb over the parachute and his right wing caught the parachute’s suspension lines. 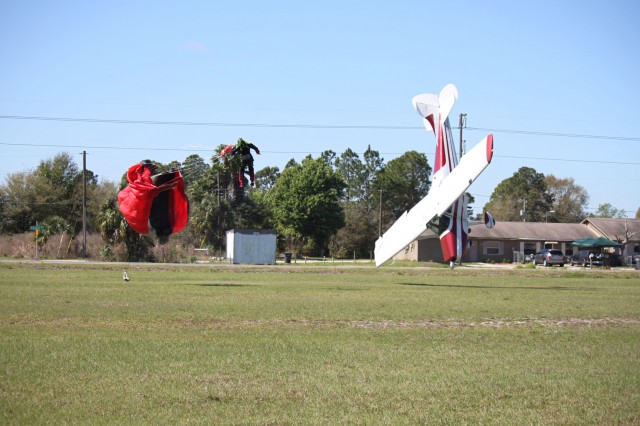 The Cessna pitched up and then down. The skydiver was pulled up into the air like a marionette and then dropped to the ground as the nose of the plane sliced through the strings of his parachute. The aircraft crashed nose-first into the runway. 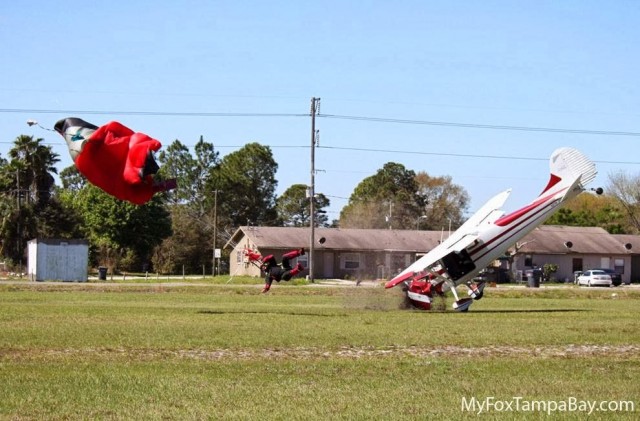 Unbelievably, both the pilot and the skydiver suffered only minor injuries. They were taken to hospital immediately but suffered only bruises, no broken bones. 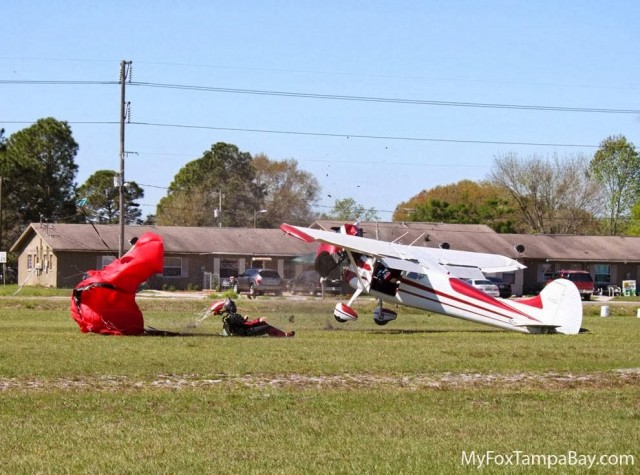 The NTSB report categorised the accident as a “collision with terrain/object (non-CFIT)” and “Uncontrolled descent” which I suppose is the closest they have for a mid-air collision of man and plane.

The National Transportation Safety Board determines the probable cause(s) of this accident as follows:
The failure of the pilot and the parachutist to see and avoid each other, which resulted in the airplane’s wing colliding with the parachute’s suspension lines.

The point is that both the pilot and the skydiver were responsibile to “see and avoid” the other traffic in the circuit. The fact that neither of them had a clue that the other one was there means that they were both at fault for the resulting collision.

I’m lucky enough to have never flown into an airfield at the same time as parachutists were dropping. I’ve been a passenger, though, and it’s a case of constant looking out and making sure that you know where the jumpers are and that there’s no chance of getting close to them.

Even if the high wing of the 170 hadn’t blocked the vision of the pilot — and who looks for parachute traffic on rotation? — there was probably not enough time to get stopped without there being a collision. The pilot, likewise, was surely busy on the arrival over trees and power lines before setting up for the touch and go.

The parachutist likely had few options as well. New chutes are fairly maneuverable compared to old fashioned models, but there’s only so much a chutist could do under the circumstances, especially since he’d just cleared power lines behind him.

It does seem a bit unfair to the pilot, as the skydiver was out of his drop zone and should not have been landing on the active runway. I just think that on short final, you can’t really expect to see someone coming dropping down onto you from above. Your attention is ahead of you, gauging the touchdown point and ensuring that the runway is free of obstructions; I don’t think it would occur to me to be looking up! 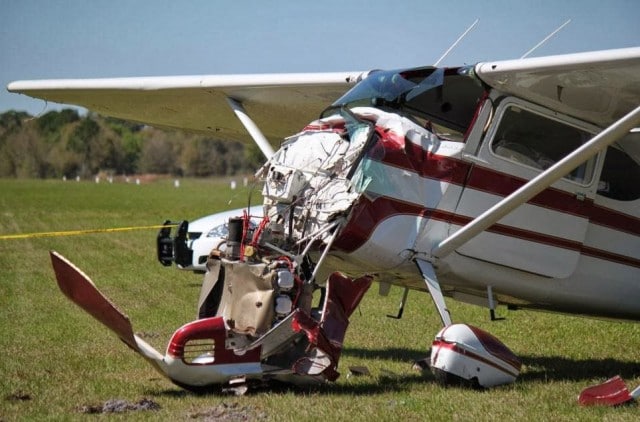 The good news is that both pilot and skydiver were fine and said they planned to continue their hobbies despite the scare.

And Tim Telford got the photographs of his life!