This week, a 25-year old pilot was fined £3,400 for airspace infringement. The case was somewhat dramatically reported on in the Herts and Essex observer: Pilot fined after causing havoc over Stansted airport | Uttlesford village headlines

The Court Reporter has written up the case, including the claim that, “At one point, Marriott’s poorly-equipped Piper Super Cub was said to have been just 1,215 feet from a Ryanair Boeing 737.” I would have thought that if there was a real risk of collision, the pilot would have been charged with a lot more than “entering controlled airspace”. But the infringement did manage to cause a bit of havoc, to be sure.

On the 30th of September, the pilot flew the Piper Super Cub to the adorably named Cuckoo Tye Farm in Suffolk to visit a friend. 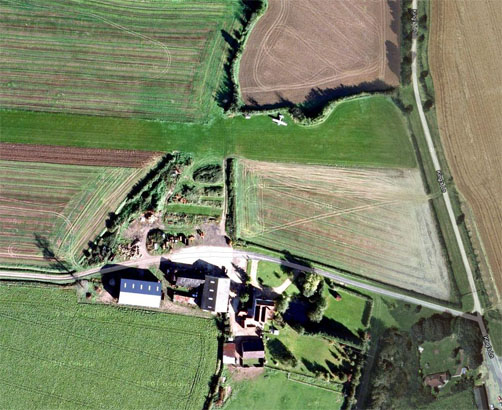 He said that he was returning to Tisted using the same route but the wind was strong and, although he was a confident navigator, he became lost.

The aircraft did not have GPS nor a mode-C transponder. He entered Stansted controlled airspace at 13:20.

You are required to have a transponder if you are flying in controlled airspace but, to be fair, he didn’t intend to fly into controlled airspace, he just got lost. He told the court that he recognised Stansted but misjudged the distance. He stated that he deliberately flew low level so that he would remain below commercial traffic.

However, that wasn’t very reassuring for the Air Traffic Controllers. They could see an unknown aircraft in their area but had no idea what height it was at – information which would have been passed on by the transponder. All departing flights were suspended while the Piper Super Cub “drifted” through Stansted and Luton airspace.

Infringements into control zones aren’t uncommon, especially in the southeast of England, where airspace is tight. I had an autopilot failure flying over White Waltham and I deviated slightly east while I tried to work out the problem – putting me just inside of Heathrow’s control zone. The friendly controller from Farnham, who was watching me on his radar, contacted me to ask if everything was OK (yes, sort of) before informing me what I’d done (Oh no!) and kindly offering me a heading to get the hell out before I caused chaos (Thank you, kind soul, whoever you are).

The key point though, is that the pilot needs to be talking to someone. I was lucky that the controller I was in contact with took the lead before I’d even realised I had gone astray. If he hadn’t, then the moment that I realised, it would have been my responsibility to tell someone.

I don’t have to know where I am to do this. A pan pan call can be used to declare any urgent problem. A pan pan call follows the same format as a Mayday call but tells the controller immediately that you are not in distress: that is there is no immediate danger to people or the aircraft. So a pilot would use a pan pan call for a fuel shortage, a navigational system failure or simply to let someone know as soon as possible that he is lost. In my case, I was already speaking to a controller who could see me on radar. Otherwise, I would have contacted the UK Distress and Diversion cell (D&D) on 121.5 (Civil Emergencies frequency).

So, the problem with this infringement into Stansted airspace is not that the pilot got lost. It’s that the pilot did not contact anyone in order to tell them that 1) he was lost, 2) he was flying at low level and 3) he would be happy with help to get back on track. The Magistrates chairman made this clear:

“You knew the airspace in this part of England is very congested and therefore the burden’s on you to be spot-on in your navigation.” He added that Marriott had recognised he was lost but repeatedly failed to contact air traffic control.

“While you knew what altitude you were at no-one else did, or what your intentions were. You felt safe but that’s not the point.”

The pilot, who pleaded guilty, argued that he was concentrating on his flying and navigation as per the golden rule of aviation: Aviate first, navigate second and communicate third. Clearly, his priority has to be to fly the plane: it would be ludicrous to try to speak to someone if the aircraft is not under control. But, by his own account, he was flying straight and level and at low altitude to avoid possible commercial traffic, so he was fine. Having screwed up on navigation, he needs to communicate that failure, rather than continue to bumble through, hoping that he will get it sorted.

After yesterday’s hearing, [the pilot] said he still had his licence and had not flown since although the ordeal had not put him off. “It was a frightening experience,” he said. “That’s why I deliberately didn’t contact anyone. I was still trying to work out where I was and where I was going.”

For eleven minutes, he caused a serious disruption across two major international airports who had no means of speaking to him. It was his job to communicate to someone what was happening, even if that is the uncomfortable admission that he had screwed up. He appears not to have grasped that although he felt safe, no one else knew that he was under the commercial traffic and out of the way.

He said he thought the CAA decision to prosecute was “incredibly harsh” over something he described as “one navigation error”.

Except that the problem was, it wasn’t just a navigation error. It was a continuing, eleven minute long, navigation error in which he entered Stansted and Luton’s airspace and did not contact anyone at that time to help them work around his error. In the end, he was fined £3,400 but kept his licence. To be honest, I think he was lucky that it wasn’t the other way around.